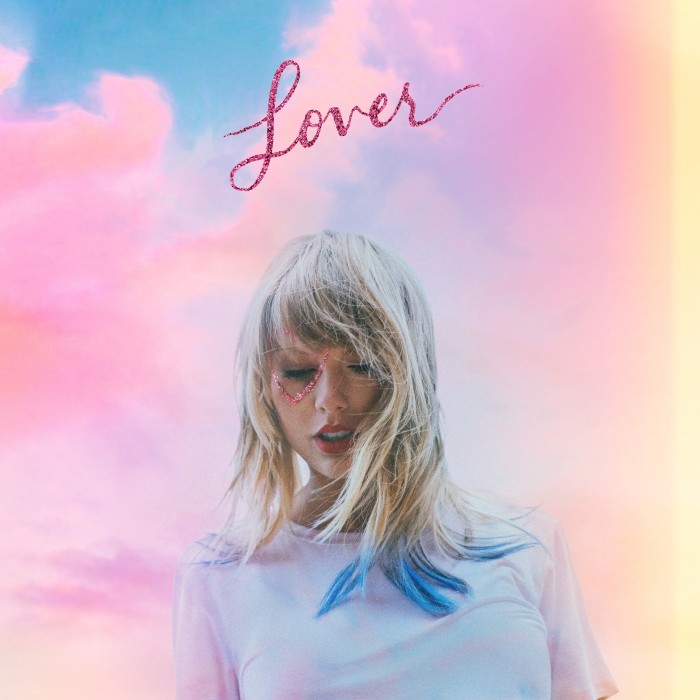 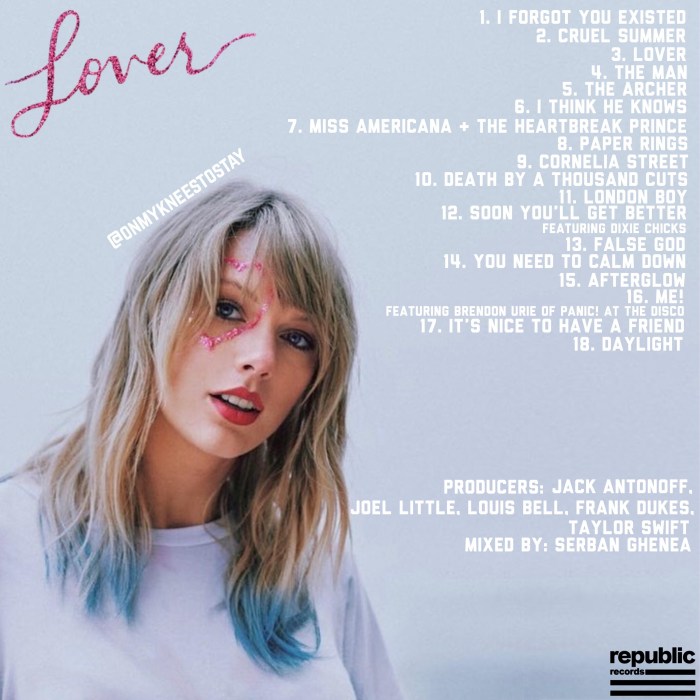 Übersicht:
Lover is the seventh studio album by American singer-songwriter Taylor Swift. It was released on August 23, 2019, by Republic Records. As executive producer, Swift worked with producers Jack Antonoff, Joel Little, Louis Bell, Frank Dukes, and Sounwave on the album. Described by Swift as a "love letter to love", Lover celebrates the ups and downs of love and incorporates brighter, more cheerful tones, departing from the dark sounds of its predecessor, Reputation (2017). It has been described as a pop, pop rock, electropop and synth-pop release, that contains influences of country music, pop punk and contemporary R&B.

Lover features collaborations with the Dixie Chicks and Brendon Urie of Panic! at the Disco. It was preceded by three singles, the international top-five singles "Me!" and "You Need to Calm Down", and the title track. The album received generally positive reviews from critics, who commended Swift's songwriting conveying emotional maturity and honesty. A few commentators found the album lengthy and inconsistent in places.

Background
Speculation of the album started on February 24, 2019, when Swift posted a photo of seven palm trees to her Instagram account, which she later confirmed was the day she finished the album. On April 13, Swift released a countdown on her official website, counting down to midnight EDT (UTC-04:00) on April 26. At midnight, Swift released the album's lead single, "Me!" featuring Brendon Urie of Panic! at the Disco, along with its accompanying music video. Swift encouraged fans to find hints about the album title in the video and many fans pointed out that at one point in the video, the word "Lover" appeared at the top of a building in the background.

On June 13, 2019, Swift confirmed the album title in a livestream on Instagram, and that the album would be released on August 23, 2019. The numbers of the release date (eight, two, and three) add up to 13, Swift's favorite number. Swift also announced that the album's second single, "You Need to Calm Down", would be released the next day on June 14, followed by its music video three days later. She described the album as a romantic one, stating that it was "not just simply thematically, like it's all love songs or something. The idea of something being romantic, it doesn't have to be a happy song. You can find romance in loneliness or sadness or going through things in your life... it just looks at those things through a romantic gaze." In a Vogue interview published in August 2019, Swift described the album as a "love letter to love, in all of its maddening, passionate, exciting, enchanting, horrific, tragic, wonderful glory." While promoting the album in a YouTube livestream on August 22, Swift revealed that the title of the album was Daylight before she wrote the song "Lover".

Music and lyrics
At eighteen tracks, the standard edition is the longest in Swift's catalogue. The deluxe edition adds two voice memos. Lover is a departure from the darker, hip hop-influenced sound of Reputation (2017), returning to the 1980s-influenced synth-pop of 1989 (2014). Lover also revisits the country music of Swift's earlier albums, and draws from a range of genres including pop, pop rock, electropop, pop punk, and R&B. Many publications also noted Swift's tackling of politics and social issues in the album, after previously receiving criticism for maintaining an apolitical public image.

Opener "I Forgot That You Existed" is a cheery farewell to the events that inspired Reputation, set to a minimalist arrangement of piano and finger snaps. "Cruel Summer" is a synth-pop song co-written with St. Vincent, which according to Swift is about "the feeling of a summer romance... where there's some element of desperation and pain in it, where you're yearning for something you don't quite have yet". "Lover", the title track and third single, is a slow country waltz that has been compared to Mazzy Star's "Fade into You". In "The Man", over an uptempo, synth-pop tune, Swift imagines the media's treatment of her if she were male. The promotional single "The Archer" is a dream pop song in which Swift reflects on her flaws. The funk-influenced "I Think He Knows" sees Swift examining the blossoming of a relationship, while also referencing Nashville's Music Row.

The high school setting of "Miss Americana & the Heartbreak Prince", complete with cheerleader chants, is reminiscent of Swift's earlier work "You Belong with Me". The gloomy synth-pop song has been interpreted as Swift expressing disillusionment over the state of US politics, and was compared to the work of Bruce Springsteen and Lana Del Rey. The bubbly "Paper Rings" contains elements of pop punk, in which Swift sings about committing to a relationship. "Cornelia Street" is named after a street in Greenwich Village where Swift rented an apartment; in the piano-backed ballad, she expresses fears that her fledging relationship will not survive. The upbeat breakup song "Death by a Thousand Cuts" was inspired by the Netflix film Someone Great, which in turn was inspired by Swift's 2014 album 1989. "London Boy" features a spoken word intro from Idris Elba and James Corden, who stars with Swift in the film Cats, namechecks the designer Stella McCartney, with whom Swift launched a fashion line in connection with the album, and is presumed to be about Swift's partner, actor Joe Alwyn. Some commentators drew parallels with Ed Sheeran's "Galway Girl". The country ballad "Soon You'll Get Better" features slide guitars and the Dixie Chicks contributing banjo, fiddle, and backing vocals; Swift addressed her parents' battle with cancer, especially her mother's second bout.

"False God" is a sensuous R&B-influenced love song, where a lone saxophone intertwines with lyrics invoking religious imagery. The second single "You Need to Calm Down" is an LGBT-friendly anthem that takes aim at internet trolls and homophobes alike. The ballad "Afterglow" sees Swift apologizing to a romantic partner for the failure of a relationship. Swift duets with Urie of Panic! at the Disco in the lead single "Me!" about themes of self-affirmation and individualism. The indie pop-influenced ballad "It's Nice to Have a Friend" charts the progression of a romance from childhood into adulthood, with Swift's vocals backed by steel drums, harps, and punctuated by a trumpet solo near the middle. The song also samples the track "Summer in the South" from the album Parkscapes by the Toronto-based Regent Park School of Music. The closing ballad "Daylight" calls back to the song "Red" from the 2012 album of the same name; some publications interpreted it as a sign of Swift's personal growth and more mature understanding of love. The song ends with Swift delivering a monologue: "I want to be defined by the things I love. Not the thing I hate, not the things I'm afraid of, not the things that haunt me in the middle of the night. I think that you are what you love."
Musikinformationen im ersten Beitrag bereitgestellt von The AudioDB
Versteckte Inhalte von geringer Qualität anzeigen
Du musst dich anmelden oder registrieren um hier zu schreiben.
Teilen:
Facebook Twitter Reddit Pinterest E-Mail Link
Top